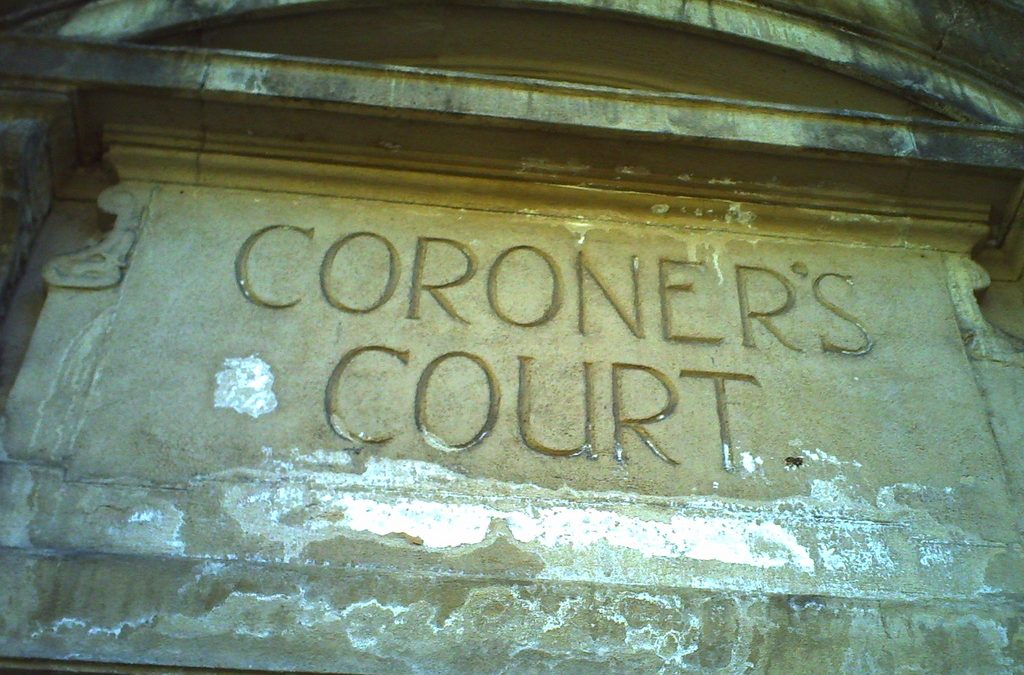 Published by Andrea on 1st March 2018

The College of Paramedics recently asked me to write a brief guide to attending an inquest, for the assistance of their paramedic members. The following article was published in the College’s journal, Paramedic Insight, on 1 March 2018:

All paramedics are likely to attend or give evidence at a coroner’s inquest at some stage during their career.  The purpose of this article is to give an overview of the inquest process and to assist with preparation should you be required to attend an inquest.

Who is the Coroner and what is their function?

The Coroner is an independent judicial officer and will be a qualified lawyer or doctor of at least five years standing (all newly appointed coroners are lawyers, but doctors were also appointed prior to 2013).  Coroners operate on a local level, with England and Wales divided into 90 coronial areas.  The coroner’s duty is to investigate any death within their area where the coroner has reason to suspect:

What questions will an Inquest answer?

An inquest is a public hearing directed solely at determining who the deceased person was and how, when and where they died.  The question of ‘how’ takes up most of the time at any inquest, as the coroner looks into the wider question of ‘how’ beyond merely the medical cause of death (which has usually been recorded within the post-mortem report).

However, coroners are forbidden from expressing an opinion on any matter other than the who/how/when and where mentioned above.  This means that a coroner will never give a verdict on any question of criminal or civil liability, for example allegations of clinical negligence, or name you in their findings.

As a healthcare professional, it is important to remember that inquests are inquisitorial, meaning they are a fact-finding exercise, rather than an exercise in apportioning guilt or rival parties ‘arguing’.

In certain circumstances, for example where the deceased died in prison, the scope of an inquest can be widened further to include a more detailed examination and commentary on the circumstances of the death.  A jury may also be called.  This is known as an Article 2 or Middleton inquest.

Preparing for an Inquest

Prior to the inquest, the coroner will request statements from relevant witnesses and this will almost always include healthcare professionals involved with the deceased.  Here are some tips if you are drafting a statement yourself:

Prior to attending the inquest, you should read over the witness statement you provided to the coroner, review the deceased’s records and request copies of key documents such as the post-mortem report and any serious incident reports prepared following the death.  If recommendations were made in any reports, or if you have identified any learning points yourself, it is important to try and implement these – coroners wish to see evidence of learning from errors.

At an inquest, you can expect to see the coroner, the coroner’s officer(s), interested persons (for example, the relatives of the deceased) and legal representatives.  Inquests are public hearings and members of the public or press may also be in attendance.

As a witness, you will be escorted to the witness box by the coroner’s officer and then invited to swear an oath or make a non-religious affirmation to tell the truth.  You will usually read your witness statement and then be given an opportunity to expand on or clarify any points.  The coroner questions each of the witnesses and conducts the inquiry, but interested persons or their legal representatives also get an opportunity to ask questions.  You are not obliged to answer any questions tending to incriminate you and the coroner will give you a warning if such questions are asked.

It is helpful to bear in mind when giving evidence that you should direct your comments to the coroner, take your time (speaking slowly and clearly) and feel free to say so if you don’t understand a question or don’t know or remember the answer to a question.  Take time to consider your answers and try to be concise.

After you have given evidence, you will be released by the coroner and are then either free to leave, or stay and listen to the rest of the inquest.

Once all the evidence has been heard and any legal submissions made, the coroner (or Jury if one is involved) will deliver the conclusions or findings, formerly referred to as a verdict.  There is no definitive list of conclusions available to a coroner but they are encouraged to use short-form conclusions wherever possible.  Some commonly used short-form conclusions are ‘natural causes’ ‘lawful/unlawful killing’ and ‘road traffic collision’.

If the coroner has identified a particular risk of other deaths, or considers that particular action needs to be taken, he has a duty to write to an appropriate body, such as the Health & Safety Executive, with recommendations.  This is known as a report to prevent future deaths, or PFD, formerly called a Rule 43 letter.

Most Inquests are routine and should not be a source of concern.  The key to reducing any anxiety you might feel is (i) good preparation and (ii) seeking the right advice and assistance at an early stage when you do need professional help.

Your employer may arrange support and representation via its in-house or external legal team.  If you find yourself in the rare situation where your employer has arranged legal representation for itself, but considers there to be a conflict of interest between its position and your position, do contact the College of Paramedics or its insurers, Abbey Legal Protection, to seek further assistance.